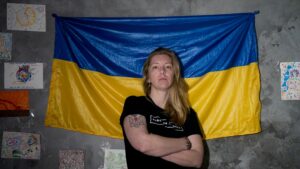 Olha Poliakova first realized something was wrong at 5:20 a.m. when her cat leapt from his usual sleeping spot on her shoulder.

As Poliakova entered consciousness, she was vaguely aware of a loud boom outside. She thought a truck driver had taken a shortcut through her neighborhood. “What an asshole,” she thought. The sun wouldn’t rise for another hour, but her martial arts class started at 7:30, so she figured she might as well start her day. Before her coffee was ready, she heard another crash outside — and another, and another.

There was no news online, but Poliakova didn’t need the internet to tell her what she already knew: The war had begun. The bangs were the sound of Russian rockets slamming into targets around her hometown, Dnipro, Ukraine’s fourth-largest city. She recognized the sound from when she’d supported Ukrainian soldiers on the front lines fighting Russian-backed separatists in 2014. Though she considered it at the time, Poliakova stopped short of enlisting herself because of her lack of military experience. She eventually developed PTSD because of her work. She didn’t want to be in a war zone again.

Poliakova, who now leads a feminist and LGBTQ rights organization called Gender Stream that focuses on promoting inclusivity and diversity in the police and military, wasted no time as soon as she realized missiles were falling that morning, February 24. Poliakova called other members of Gender Stream and told them to get to her place right away. For Poliakova, the rockets outside triggered more than her need to flee — she and fellow members of Gender Stream left their homes carrying the bare minimum and not knowing if they’d ever return. They piled into Poliakova’s small Nissan Juke — four humans, Poliakova’s cat, and a Russian toy terrier named Semion. So many Ukrainians were heading west that it took four days to drive hundreds of miles east from Dnipro to a region at Ukraine’s western tip called Transcarpathia.

Some Gender Stream members went across the border to start shelters for LGBTQ refugees inside the European Union, but Poliakova stayed in Transcarpathia, running a shelter for LGBTQ people displaced by the war who did not want to leave the country — or were not allowed to.

At the beginning of the war, Ukrainian President Volodymyr Zelensky issued an order forbidding men ages 18 to 60 from leaving Ukraine and ordering them to register for military service. (Women are not universally subject to conscription in Ukraine but they can join the military voluntarily.) While many LGBTQ people did so enthusiastically, some gay men and trans people don’t feel serving is an option. Like many straight people, those without military experience worry they will be forced to put their lives in danger without being able to contribute to the fight. Some queer people worry about homophobia and transphobia in the Ukrainian military. Some said they were afraid of being singled out if captured, given President Vladimir Putin’s crusade against LGBTQ rights.

Poliakova and her team arrived in Transcarpathia to find that an emergency LGBTQ shelter in the region was filling up with people who couldn’t leave. The shelter’s manager, a Ukrainian staffer with a European LGBTQ organization supporting Ukraine’s queer movement, asked Poliakova if Gender Stream could take on the work of helping displaced people with male documents navigate the military bureaucracy and the border patrol.

“I didn’t know that [this task was] impossible, and said ok,” Poliakova told Teen Vogue. “If we need to do that, we will do that.”