“People Are Not Coming Back to the Closet”: The Fight for Ukraine Is Also a Fight for LGBTQ Rights

Vladimir Putin’s assault on LGBTQ rights made him a hero to the global far right and a pariah in Ukraine. As the invasion enters its second week, queer Ukrainians are fighting back. 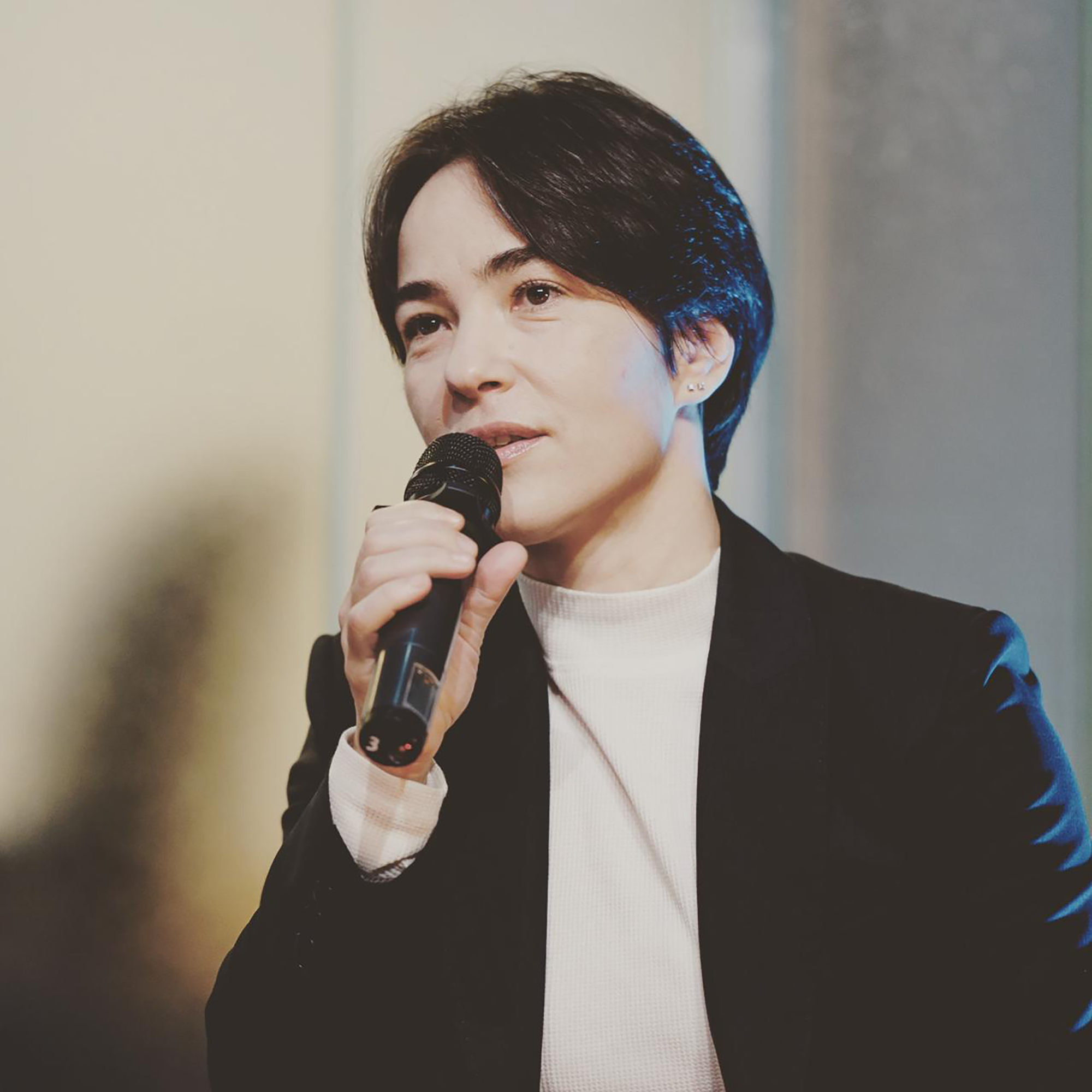 On the seventh day of the war, Olena Shevchenko posted a message of despair on Facebook.

Shevchenko, who leads the LGBTQ organization Insight, was not just voicing the heartbreak of watching her city destroyed, feeling the bomb blasts in downtown Kyiv. Or fearing what the prospect of Russian occupation might mean for her and other queer activists. It sounded like she had lost faith, questioning whether all the tools she had used over years of fighting for LGBTQ rights, Ukrainian self-determination, and democracy had proved futile.

“I do not know what will happen tomorrow or the day after tomorrow, the only thing I know is that this world has been fucked up, international structures are not effective,” she wrote. “There is no system that can stop this shit.”

LGBTQ people have been at the center of the tug-of-war over Ukraine’s future from the moment Vladimir Putin launched his crusade to pry it from Europe.

I first met Shevchenko in the fall of 2013, when I came to Kyiv to write a story headlined “The Russian Plot to Take Back Eastern Europe at the Expense of Gay Rights.” That was a big moment in both Ukraine and Russia. Ukraine was on the verge of signing a formal political-association pact with the E.U., a step Putin and his allies in Ukraine were doing their best to derail. Russia was preparing for weeks in the international spotlight with the Olympic Games in Sochi around the corner. And global LGBTQ rights advocates had been hammering Putin for months, following Russia’s enactment of its so-called “gay propaganda law.”

At first the Kremlin seemed surprised that the outside world cared so much about the gay propaganda law, which technically restricted providing information about “nontraditional sexual relationships” to minors. But Putin quickly recognized the controversy as an opportunity. It was a chance to globalize a culture war to Russia’s advantage, portraying Russia as the champion of “traditional values” in a global showdown against democratic Western nations that had lost the plot in an endless quest for “human rights.”

Ukraine was already the proving ground for this strategy by the time I met with Shevchenko that November.

“Now the fight [is] between East and West, Russia and Europe—Ukraine is the field of the battle,” she told me at the time.

This figurative battle became a literal one at lightning speed. Ukraine’s then president, Viktor Yanukovych, pulled out of talks with the E.U. toward the end of November and announced his intention to join Russia’s customs union instead. Protesters transformed Maidan Nezalezhnosti—Independence Square—in the heart of Kyiv into the “Euromaidan,” the epicenter of protests that were eventually attacked by riot police. Shevchenko was on the barricades, organizing women’s self-defense forces, and she celebrated when Yanukovych was ousted in 2014 and replaced by a pro-European government.

When Russia invaded Crimea in Ukraine’s south in 2014 and Russian-backed separatists launched a war against the Kyiv government in Ukraine’s east, Insight and other LGBTQ organizations opened shelters for people fleeing conflict. The years since have not been easy for LGBTQ rights supporters. There has been some progress: The government barred employers from discriminating on the basis of sexual orientation and gender identity, and rules were reformed to make it easier for transgender people to change their legal status. But hate crimes are sadly common, and LGBTQ events and community centers have frequently been attacked. A women’s march Shevchenko helped organize was targeted by far-right thugs in 2018, and the police responded by arresting her.

Which is why it was significant that Volodymyr Zelenskyy shouted down an anti-LGBTQ heckler several months into his presidency in 2019—something that would have been hard to imagine for a president years earlier. His government proposed hate crime legislation that covered LGBTQ people in 2020.

The perseverance of Ukraine’s LGBTQ movement was an important signal that Russia’s culture war was failing in one of the places where it began. Activists in neighboring countries have battled attacks from anti-LGBTQ politicians, often pushed by forces aligned with the Kremlin. Opposition to LGBTQ rights helped forge an alliance with Russians close to Putin around the world, including in the United States—this is part of what drove much of the social-conservative movement in the United States to embrace Putin.

“Putin doesn’t threaten our national security, Obama does,” wrote the communications director of a U.S.-based social-conservative organization in a 2014 article defending Russia’s invasion of Crimea.

If Russia succeeds in conquering Ukraine, it calls into question the fundamental principles of human rights and democracy upon which the E.U. and the global LGBTQ movement have been built. What good is a decade of building a human rights infrastructure or working toward European integration when bombs are falling on your neighborhood, or people cannot buy food, or a disabled person can’t even find a way down from their top-floor apartment to flee the fighting?

“​​Now it’s like the whole international system is crashing,” Shevchenko told me. And in Ukraine, as we’ve seen in Afghanistan, Syria, and countless other conflicts around the world, LGBTQ people and other marginalized groups face special vulnerabilities in getting to safety. Earlier this week, armed men broke into the offices of the LGBTQ organization Nash Mir, beating four activists sheltering there.

Many queer Ukrainians are serving in the Ukrainian military, but many trans people—who are elligible for a medical exemption from the order that all men ages 18-60 remain in the country—are being blocked at the border by Ukrainian officials who see an “M” on their official documents, according to reports from many NGOs assisting them.

Queer communities in neighboring countries have mobilized to help Ukrainians fleeing conflict—raising funds, setting up shelters, trying to troubleshoot problems at the border. But LGBTQ people’s rights have been under attack in several of Ukraine’s neighboring countries, and there is a palpable fear that the situation could grow worse if Russia expands its ambitions.

And LGBTQ activists are deeply concerned for queer folks in Russia, where there is a growing expectation that Putin will impose some sort of martial law and they will be hunted along with other opponents of his regime.

“We’re working to shelter refugees while worrying about becoming refugees ourselves,” said one activist in Moldova, where Russian-backed separatists have claimed independence for a region along Ukraine’s southwestern border. “It’s just two hours for Russian troops to reach our capital.”

For now, Kyiv stands. Though a million Ukrainians are estimated to have fled the fighting, some 42 million people remain; many LGBTQ activists are staying to fight, and some who were abroad are returning.

One of those is Lenny Emson, director of Kyiv Pride, who was outside the country when fighting began.

And Shevchenko is still in her apartment near Kyiv’s central station, where thousands of panicked civilians have had to fight their way onto trains. Shevchenko told me she has no plans to leave—in fact, most of her team is staying, not just in Kyiv but throughout Ukraine. And that’s true for many LGBTQ activists on the ground.

“I will stay,” Shevchenko said, in order to keep assisting where she can and fight if she must.

When I asked her why she hadn’t made a plan to escape should Kyiv fall, she said, “Because somebody needs to stay.”